Kira, is not just a circus artist or a dancer. Using the language of the body he has invented a way of expressing and revealing himself emotionally.
His Leonardo Da Vinci’s Vitruvian Man moves with strength and fear, reveling in its novelty.

And original member of “Break the Funk” which represented Italy to the world at some the most important national and international events like: International Battle Of The Year 2004 where they won “Best Show”, Freestyle Session and Red Bull Beat Battle. In 2006 she became a member of the “Bandits: group which many Italian and international contests.

From 2009 he was a member and choreographer fro the group “The Mnai’s” 3 time winners of “Street Fighters”, finalist on the television program “Italy Got Talent” and guests on Paris’ “Dance Delight.”

He was a member of “Unio Crew”, a group formed to represent Italy abroad, guests on: “Dance2Dance” in Switzerland in 2012 (in 3 classifications), “World Of Dance Europe” in Eindhoven 2012 (Holland). He practices parkour in “Trick’N’Group” in 2008 and a current member of “Natural Force”. 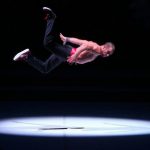